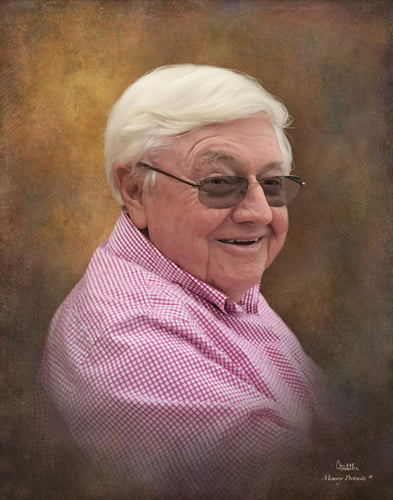 Doug was born on March 24, 1934 to Junious and Hilda Cherry Speight in a rural farmhouse in Hobgood as a 11 lb 4 oz baby which contributed to his unique special little arm. He married the love of his life, Gertrude “Trudy” Staton on September 29, 1957 and they enjoyed 58 years together prior to her death in 2016. Doug was devoted to his family. He was extra proud of his grandchildren and love to tell others about them and their accomplishments. Doug was very community minded.  He was an devoted member of the Scotland Neck United Methodist Church and served on the Scotland Neck Volunteer Rescue Squad and the Volunteer Fire Department.  He was instrumental in the restoration of the Hobgood Historic Community Church (Facebook Link). As a devoted Mason, he supported the Masonic Home for Children in Oxford. He was happiest behind the camera and as a result, had the privilege of capturing many family events, weddings and community events. Doug was a talented, award-winning photographer and owner of Photographix by Doug, with award recognition as recent as August of this year. Doug’s outgoing personality made him a great conversationalist with family, friends and total strangers on any topic.  He will be truly missed by all that knew him.

Doug is preceded in death by his parents, Junious and Hilda Speight and his wife, Trudy.

The family would like to thank everyone for their prayers, calls, and texts during Doug’s illness. Special thanks to the outstanding staff at the Vidant Edgecombe Hospital Intensive Care Unit for their exceptional care, love and support during the last four weeks.

Friends are invited to visit Letchworth-Sykes Funeral Services on Tuesday, October 13, 2020 between the hours of 10:00AM to 7:00PM to pay their respects. Due to the unprecedented COVID circumstances and the impact felt by the family, this time is for the community to pay their respects, but the family will not be present.  Instead, the family plans to have a Celebration of Life Gathering for Doug at Sylvan Heights Bird Park at a later date.

Due to COVID, the funeral service will be a private family event. However, a tribute video will be shared.

Letchworth-Sykes Funeral Service is handling the arrangements for the Speight family and online condolences can be directed to the family by visiting letchworthsykesfs.com.

Edy and Family,
So sorry for your loss. My thoughts and prayers are with you and your family during this time.
Romans 14:8
If we live, we live for the Lord; and if we die, we die for the Lord. So, whether we live or die, we belong to the Lord.

Edy and Brian, I don’t expect you remember Sally, Celia and Bob Ballance who lived nearby in Scotland Neck. Your Mother and I worked together at Branch Bank. Both of your parents were so gracious to make us feel at home in a new town. I’m so sorry to read that your Dad passed. Both of them were such great individuals and good friends.

I’m sorry to hear of Doug’s passing. He was always so helpful whenever I went into the hardware store, always making sure I wasn’t forgetting anything. In later years I would see him around town and he would always have a kind word.
My deepest sympathies and condolences to his family and friends.

I did not know him for long. But he was a pleasure to be around. Prayer for Brian, Edy and Les.

Edy and Brian, so sorry for your loss. Doug was a sweet man and always had a kind word for everyone. I enjoyed my talks with him at Claudines in Rich Square. He and your mom were good friends and colleagues with my parents Harry and Nancy McDaniel. All my love and prayers

L. E. and I were so sorry to hear about Doug. We didn’t see him often, usually at the Speight reunions, but we always enjoyed talking with him and with Trudy before she passed. And he was such a talented photographer. Our thoughts and prayers go out to you, Brian, and Edy and your families..

Doug was such a special person and I got to know him as I visited his wife each week at the rest home. There was not a day that went by that he was not there for her during her meal time every day. He was always around events taking pictures of our lives in the Hobgood area. He is one of those people that will always be remembered during my time here in Halifax County as an example of what a good person can really be. I have no doubt that Doug is now with our Heavenly Father.

Brian and Edy I send my deepest condolences.
Mr Speight was always so nice and always spoke whenever he saw me.
I am so glad to have gotten to know him and he will always have a special place in my heart.
My prayers are with you…and may the Lord give you peace and comfort as only He can.
Much love you all.

Doug was such a Special, Caring and Strong person. So thankful to have known him. My truest condolences to his family.

Edy and Brian, my family and I are all so sorry for the loss of your dad. All the Meredith girls loved him like our own. Your dad was truly one in a million. Love to you and your families.