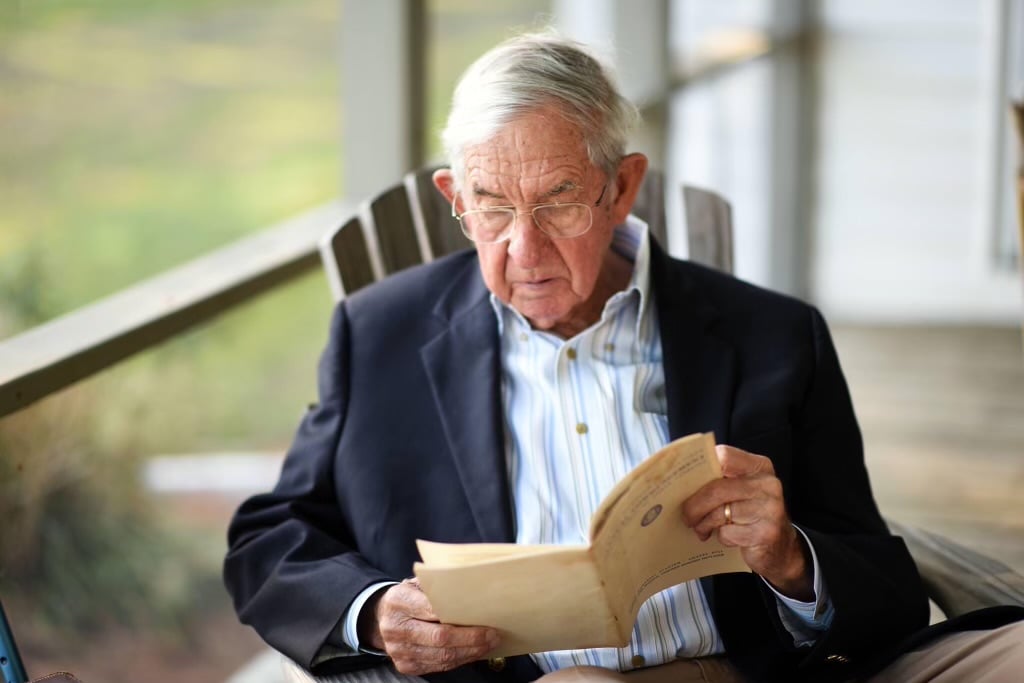 GREENVILLE, NC – Dr. Jay Fred Saunders, age 93, formerly of Aulander, passed away on Monday, January 17, 2022 at his home in the Cypress Glen community.

Fred attended Bullis Preparatory School then UNC Chapel Hill, completing undergraduate studies in 1950.  He went on to medical school in Chapel Hill, graduating in the first four-year class in 1954 (His father graduated in the first two year class at UNC medical school 50 years earlier).  Upon graduation, he married his childhood sweetheart Lois Lucille Nelson.  After one year of family practice residency at the Medical College of Virginia, he felt “called” to enter the U.S. Army, serving in Inchon, Korea, as a Captain in a M.A.S.H hospital unit.

After his Army service and residency completion, Fred returned home to Aulander in October of 1958 to begin his family medicine practice, in a building next to his father.  The senior Saunders retired at age 85 after 56 years of service (1916-1972). “Dr. Fred” cared for many of his father’s former patients, their children, and grandchildren throughout their lives.  Along with family medicine, Fred practiced obstetrics for the first 25 years of his practice, rarely having any time off from being “on call.” Fred was active on the Roanoke Chowan Hospital staff, which included seeing his patients day and night who came into the Emergency Department, before emergency room physicians were available.  He still made time to make “house calls” long after most physicians in the area had ceased doing so. He followed his father’s example by caring for invalids and those with limited means and no transportation. As mental health services were limited in the area, addiction intervention and support were a passionate part of his practice.

Fred retired from full-time service in 1996 after 38 years, continuing to work part-time to transition his patients’ family histories to the new physician, Dr. Simon Khoury, who continues his legacy of rural family practice today. In 2018, Fred was awarded the NC Governor’s Order of the Long Leaf Pine for his many years of tireless service to his community. For nearly 100 years, Aulander was blessed with a “Dr. Saunders.”

Fred is survived by his wife of 67 years Lois Nelson Saunders, their three children Suzanne Woolard and husband John of Kill Devil Hills, Hope Hackler and husband Tom of Wilmington, NC, and son Jay Saunders, Jr. and wife Linda of Kill Devil Hills, niece Laura Vaughan and nephew Robbie Saunders. He was most proud of his four grandchildren and their families, John Woolard III of Mars Hill, Sheldon Woolard Peebles and husband Alex of Richmond, Helen Woolard Powell and husband Jesse, of Wilmington, and Powell Hacker and wife Janet of Wilmington, and his three great-grandchildren. Holt Peebles, Peyton Powell, and Lillian Woolard.

He will be remembered for his wit, story-telling, and genuine kindness and compassion toward everyone.  His uncanny memory to never forget a name, face, or family medical history stayed with him until the very end.  His greatest joys in retirement were spending time outdoors with fellow artist friends painting scenes of his beloved rural eastern North Carolina and spending time with Lois in Colerain on the Chowan.

A celebration of life memorial service will be held Wednesday, January 26, 2022, at 2:00 pm at the First Baptist Church of Washington, 113 N Harvey St, Washington, NC 27889, with Rev. Dr. Greg Barmer officiating. The family will receive friends following the service.

Garrett-Sykes Funeral Service – Ahoskie Chapel is handling the arrangements for the Saunders family and online condolences can be directed to the family by visiting www.garrettsykesfs.com.

Hi Mrs.Lois I’m sorry about your loss Dr.was a great man I really enjoyed spending time with him when I always come to your house he had lots of wisdom always caring for people,he always talk about his painting he love to paint some time I see him setting long road painting, when y’all move I miss y’all so much he will never be forgotten he always tell me he going to live long as his daddy did he was a type of person no matter how he feels he don’t give up he was very strong so much I can say , you will be in my prayers I Love you be strong y’all was so precious to me,my condolences goes out to you.i no he will be miss.

He delivered me in Ahoskie and I am now 48 years old and work at the same hospital. I enjoyed his lovely paintings and sincerely respect his caring dedication to all of his patients. So sorry for the loss of your loved one.

Dr. Fred – my buddy – he would sit on our dock at The Harrellsville house and paint pictures of the Wiccacon River. He wore a huge hat to ‘save his sun-burnt nose’. Cutest thing you ever saw – while backing outta the driveway he would always holler at me “you sure do favor your momma!”

So sorry for your loss. He was a wonderful person to so many They don’t make Doctors like him anymore Prayers for the family during this time

So sorry,Lois. Know you and Fred are both “loved with an everlasting love and underneath are the everlasting arms…”

Dear Ms. Lois, Sue, Hope and Jay,
Learning today about Dr. Fred brought smiles, tears and floods of memories. I am forever thankful for the lifelong friend he was to my parents (except of course the ‘rivalry’ that persisted between him and my dad over UNC/NCSU which resulted in one of our families badgering the other with a ringing phone and car horns blowing late at night, depending on which team won!) Despite that, there was utmost respect. Growing up with a neighbor for a doctor just seemed normal for us; we didn’t know how lucky we were. Though not excited about a trip to the office, we knew we’d be taken care of with loving hands and a matter-of-fact manner. As you all mentioned, there were also the many times he came to our home if we needed him. Though he was a busy man, he took time to be the ‘cool dad’ by shooting baskets with us or playing in the snow, reminding us “not to eat the yellow stuff”!
He also bandaged my leg once when it got burned from riding on the back of Jay’s Honda through a cornfield (which was not allowed) and told me he wouldn’t tell if I didn’t! As I got older, I continued to appreciate his friendship and advice; he rode to Greenville with my mama and me on the ambulance when she needed to get there in a hurry which was such a comfort. As I would take my three sons to town to visit, he took time to tell them stories and try to decide who they ‘favored”; he got a big laugh when one of ours’ went to Carolina — now the youngest is finishing at State so we’re equal! These are just a few of the fond memories. He was a wonderful, well-loved man who accepted all people. I wanted to write here as I most likely can’t make it Wednesday due to school-teaching and the lack of substitutes these days. Love and Peace to you all, Kim White-Snow and family

Dr. Fred took care of many of my family members through the years including my grandmothers, Rosa Lassiter and Katie Shores. My parents Melvin and Clara Shores loved him dearly and so enjoyed his stopping by their house for coffee and Chicken plate pie (Grandma Rosa’s recipe) and just talking about old times. I have a sketch he did of the old house where my Mom grew up. I so enjoyed reminiscing with him about people that lived on the Mitchell farm. He leaves a wonderful legacy and will be long remembered.

What a great doctor and that said I will always remember the help and medical attention he gave me years ago. Dr. Saunders will always be remembered by me. My deepest sympathy to all the family.

One of a kind physician and artist much beloved at Roanoke Chowan Hospital where several of his paintings are on display. We will always remember him. Condolences to all the family.