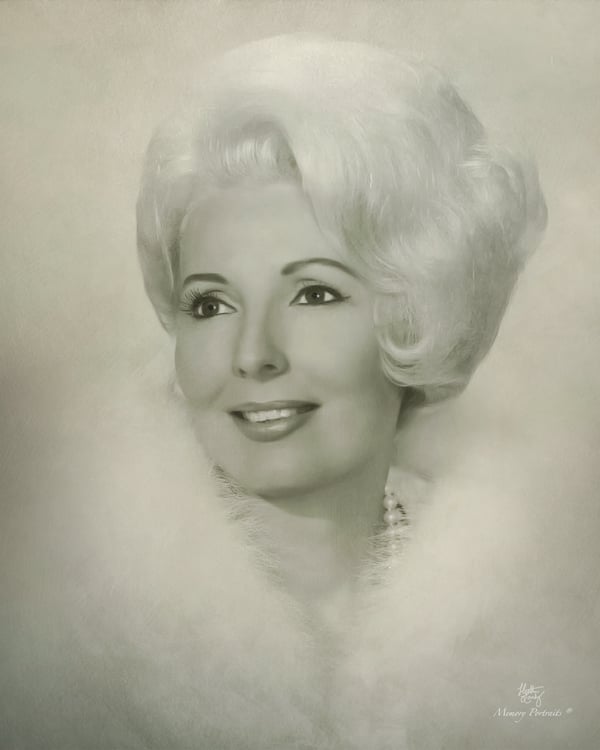 Grace was a longtime member of the Isabelle Coleman Circle at the Rosemary Baptist Church in Roanoke Rapids. She had her own radio show titled “A Woman’s World” on WCBT radio.  She was a professional model and signed a contract with Coronet Modeling Agency in 1952.  She modeled in Miami, FL, Norfolk, VA, and Seattle, WA, as well as many towns in NC. Grace appeared often on TV as a model while giving out modeling tips for the TV audience. Her last TV appearance occurred at age 73 on Raleigh’s Channel 5 doing a commercial for a cosmetics company.

Grace directed and helped produce the Miss Roanoke Rapids Scholarship Pageant from 1959 until 1991.  Her efforts helped name one Miss North Carolina as well as one runner-up to Miss North Carolina. She judged many pageants in NC and Virginia and continued to model into her 70s.

Grace was very interested in discovering her heritage and learned that she was a descendant of Robert Bolling I. His first wife was the granddaughter of Pocahontas and her father was Chief Powhatan. She died in childbirth and then he married Grace’s descendant, Anne Steith, and had seven children. The Bollings settled in Petersburg, VA where they were influential in its development.

Grace was a member of the Elizabeth Montford Ashe chapter of the Daughters of the American Revolution, First Families of North Carolina, Virginia Jamestown Society Colonial Dames of the 17th Century, The Bolling Family Society, Magna Charter Dames, the Plantagenet Kings of England, Colonial Order of the Crown, the Hereditary Order of the Families of the Presidents and First Ladies of America thru her ancestor Elizabeth Bolling who is also the ancestor of Presidents George Herbert Walker Bush and George Walker Bush. She was also a member of the Order of the Merovingian Dynasty who were the Kings of Gaul in the 5th century.

A private celebration of life graveside service will be held at Riverside Cemetery in Murfreesboro, with Rev. John Porter officiating.

In lieu of flowers the family suggests that memorials be made directly to Rosemary Baptist Church, 936 Jackson Street, Roanoke Rapids, NC 327870 or online by clicking here.

.Garrett-Sykes Funeral Service – Ahoskie Chapel is handling the arrangements for the Boone family and online condolences can be directed to the family by visiting www.garrettsykesfs.com.

Dear Laura, John and families. I am the eldest daughter of Frances Lowe. I spent many days in the Boone home in Roanoke Rapids as your babysitter and housekeeper. Such a lovely family. Sending condolences for the loss of both your parents. Was home visiting my Mom and she had saved the obituary of Mrs Boone for me. Loved your family so much. Keeping you in my thoughts and prayers. Cathy Trumpler (Lowe)

My most sincere condolences to Laura, John Woodie, Vivian and their families for the loss of Grace. I have had the privilege and pleasure of getting to know Grace and Woodie Jr. during my posting in Raleigh in the early 2000’s and have very fond memories of this very nice couple and of their family. Warmest regards.

Im so sorry for your loss. Dr. Boone was my family doctor and I remember seeing Mrs. Boones picture in his office when i was little. I remember always telling him how beautiful she was. Keeping all of you in my thoughts and prayers!!

Dear Laura, John and Families,
We are so sorry to hear about Grace. Grace and John Woodie were wonderful people and were so good to our parents, Vernie & ZL Davenport. For a few years before they moved to Raleigh, they would visit us (my parents) at lest once a month & would always bring a bag of books and candy. My father, ZL and John Woodie were first cousins. Mama always told us about their wedding day. My father was a groomsman in the wedding. It was the hottest day ever. Everyone nearly melted as did all the candles!! I have missed the contact with them these last few years. They were very special people. Our sympathy to all the family.
Sincerely, The Davenports….. Verlene, Jimmy and Charles

Mrs. Boone was a lovely lady who I recall so fondly from my childhood in Roanoke Rapids. I remember telling my mom just how beautiful I thought she was. She was elegant and embodied Grace and all that that word and name means. God’s peace be with your family now and always.

Please hold yourselves close as a family while you remember the good times. I was raised in Murfreesboro and my sister lived and knew her in Roanoke Rapids.

Dear Laura and Family, so sorry to hear about Your Mother. Such a Beautiful Life Well
Lived.