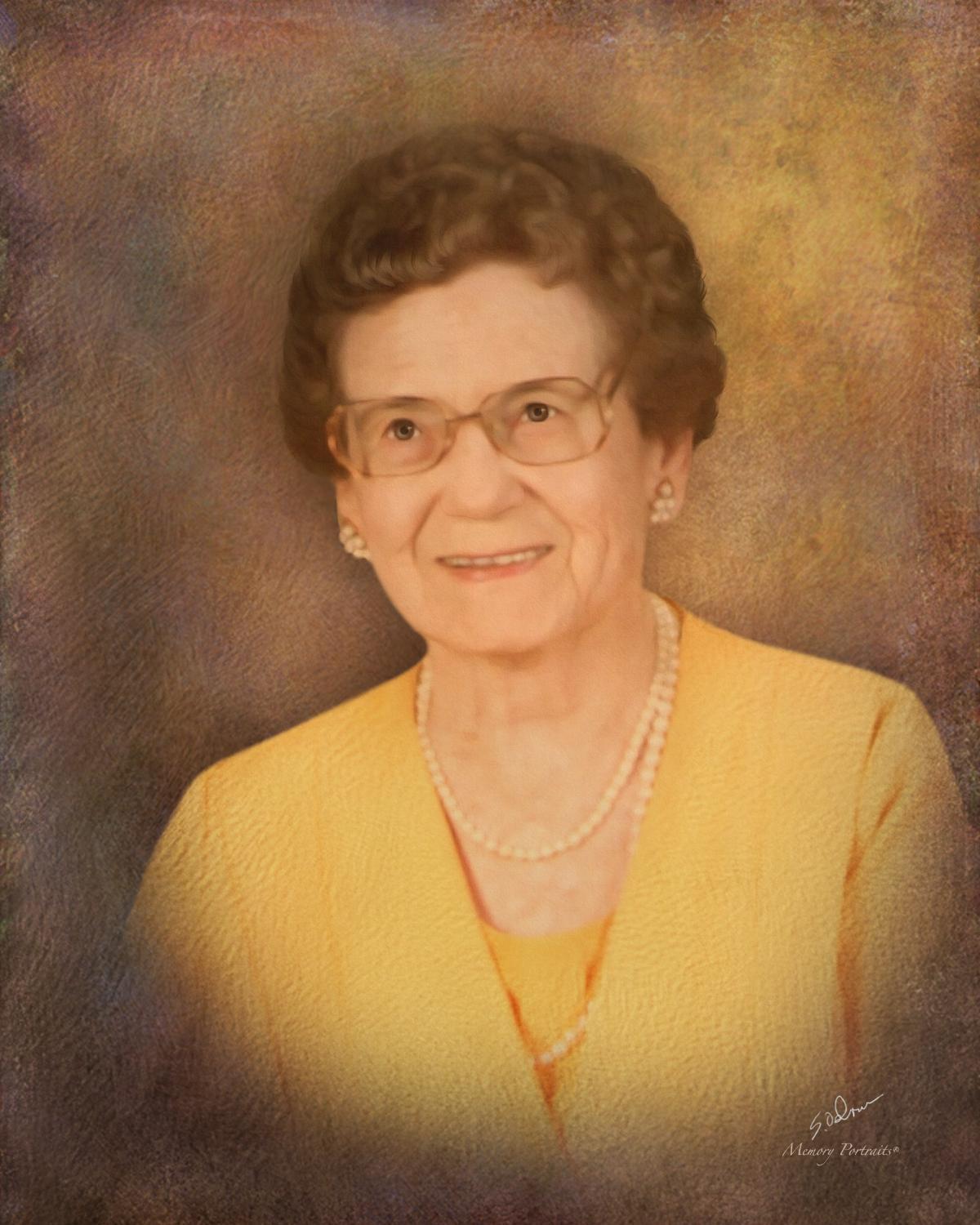 Helen Lassiter Proctor Rawls departed this world on the wings of a heavenly angel on July 26, 2014. She was born as the first daughter to sharecroppers Bob and Nellie Lassiter in rural Virginia on March 18, 1914.

The Lassiter family moved to the Ahoskie area when Helen was in her early childhood and lived in the old Cad Jenkins house (formerly Catherine’s). Farming activities took them to the Harrellsville and Center Grove communities and then to Early’s Station where Helen first attended public school. Her tenacity and strong work ethic were evident early on. She walked from Early’s Station to the old Ahoskie High School (now the Ahoskie High School Apartments) to attend classes with her favorite teacher, Miss Mina Holloman. When Helen was a teenager and her mother became an invalid, she assumed the chores of the household and continued to attend to duties on the farm as well. As a young girl she accepted the Lord as her Savior at Early’s Baptist Church followed by baptism at Bonner’s Bridge.

In her late teens, Helen met and fell in love with Claude Oliver Proctor, Sr. who lived across the field from her on Williford Road. They were married in Suffolk, VA on the day after Christmas in 1934. Together they began as sharecropper tenants on the Spurgeon Williford farm and welcomed their first child, Claude Oliver Proctor, Jr., in 1938. Money was scarce in those years from the Great Depression, so Claude and Helen picked huckleberries to sell and graded tobacco for farmers in the neighborhood to make ends meet. Their hard work and thriftiness allowed them to purchase the Old Harrell Schoolhouse on Jernigan Road where the Good Lord blessed them once again with a daughter, Cordelia (Dee) in 1940. Between the backbreaking chores of killing hogs each January, making soap in a wash pot, scrubbing clothes on a washboard, and cooking on a wood stove, Helen was always there at Claude’s side to put in and grade tobacco, pick cotton, or assist in any of hundreds of duties on the farm. Helen earned additional income selling her delicious home-cooked meals to tobacco men from the back of a trailer during tobacco auction days at the old Basnight Warehouse in Ahoskie. By the end of the war in 1945, their hard work and thriftiness paid off again and Claude and Helen purchased their own farm on the Early’s Station Road.

Claude and Helen followed their dream to own and operate a store. In 1949 they took a great risk, sold both their home site and the farm, purchased one acre of scattered pine trees at the intersection of Jernigan Road, Williford Road and Early’s Station Road and built a new home and store. Proctor’s Service Store was a success from the beginning as it provided for college educations, new cars, vacations and other rewards for hard work and thriftiness. One of Helen’s proudest moments was when she learned to drive their new 1955 Chrysler at the age of 40. When Claude passed away in 1963, Helen continued to run the business. They were especially proud of their pledge of ‘no beer sales’ and ‘closed on Sunday’ which remained until Helen retired from the store in the early 1970s. Helen married Archer Rawls of Aulander in 1978 and enjoyed many years in her home and church in her new Aulander/Millennium community.

The family expresses special thanks to Sandra Plaunty and her staff at Ahoskie House for their care of Helen during her last years, to Vidant Home Health and Hospice, and to her niece Rachel Young, grandniece Donna Young Pittman, and Bill Bryant for their care and visits.

The family will receive friends at Garrett-Sykes Funeral Service, Ahoskie, NC from 7:00-8:30 PM on Tuesday, July 29, 2014. Graveside service will be held on Wednesday, July 30, 2014 at 2:00 PM in the Proctor family plot at Ahoskie Cemetery in Ahoskie, NC with Rev. Greg Hurdle and Rev. Bob Skeens officiating.

Flowers are welcome or memorial donations may be made to Oak Grove Baptist Church, PO Box 247, Aulander, NC 27805, American Cancer Society, 930 Wellness Dr. #B, Greenville, NC 27834, or a charity of your choice.

Helen’s indomitable spirit will live on in her children, grandchildren and their progeny. She was a lifelong Christian who truly lived the Bible message every day. ‘Miss Helen’ was an inspiration to us all. Now no more pain and no more sorrow in this world. Just sweet, eternal sleep in the loving arms of Jesus. Mother, Grandmother, Great Grandmother, and Aunt we love you and miss you so much.

‘For God so loved the world that He gave his only begotten Son, that whosoever believeth in Him should not perish, but have everlasting life.’ John 3:16

Garrett-Sykes Funeral Service is handling arrangements for the Rawls family and online condolences may be directed to them by visiting www.garrettsykesfs.com