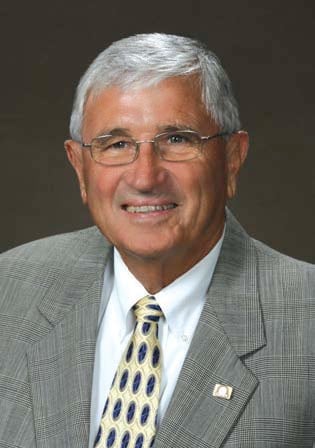 Rev. Charles Robl will be officiating the service.

Jerry Lee Hamill was born in Enfield, NC, on June 2, 1944, and died on October 2, 2021. He graduated from Enfield High School, and attended Chowan College, and later graduated from the Agricultural Institute at North Carolina State University.

Throughout his 54 years of farming, Jerry enjoyed the challenges of farming as well as discussions of farming techniques and rainfall amounts with friends and farmers across the country. Jerry was driven by a tireless work ethic and a determination to produce high quality crops with minimal environmental impact. He was a progressive farmer, adapting the latest products and processes to increase operational efficiency.

As a steward of the land, Jerry won various county, state, and national awards for peanut and cotton production, as well as for conservation and sustainability measures. Because of the help of his incredible farm team, his farm received the county award for peanuts seven times and for cotton six times. He was honored in 2021 with the Southeast High Cotton Award by the Cotton Foundation/Farm Press Magazine and with the Cotton Producer Recognition Award by the Southern Cotton Growers. He was often interviewed by news outlets and enjoyed communicating the difficulties and joys of farming.

Jerry enjoyed being a lifelong member of Eden United Methodist Church. He was also a member of his local Soil and Water Conservation Board, BB&T bank board, and a founding member of both a local cotton gin and peanut cooperative. Jerry was active in industry leadership roles as a past president of the NC Peanut Growers Association and a director with Cotton Incorporated. He also served on the boards of the NC Cotton Producers Association, the Southern Cotton Growers, Staplcotn, Cotton Board and the NC Farm Bureau.

He is survived by his wife of fifty-two years Elizabeth (Bettye) Futrell Hamill and their two daughters, Gina Hamill Donahoo (John) and Claudia Hamill Jenkins. He adored his six grandchildren: Libby, Abby and Anna Donahoo; Turner, Hamill and Polly Jenkins. He is also survived by several nieces and nephews, many cousins, and a huge circle of friends who are like family.

There will be a graveside service at Elmwood Cemetery in Enfield on Sunday, October 10, 2021 at 2:00pm. In lieu of flowers, memorial gifts may be sent directly to Rainbow Animal Rescue, P.O. Box 972, Roanoke Rapids, NC 27870 or Click Here or directly to the Downtown Enfield Restoration and Preservation Association, 7622 Highway 481, Enfield, NC 27823 or Click Here

Letchworth-Sykes Funeral Service is handling the arrangements for the Hamill family and online condolences may be directed to the family by visiting www.letchworthsykesfs.com

My thoughts and prayers go out to Betty and the family.

I loved this man. We shared so many memories of Memphis, Beale Street, etc. He loved his family. Just a good person in every way, and we will miss him so.

Bettye,
Kathy and I send our condolences to you and your family. Jerry was always a refreshing presence whenever we saw each other at various cotton meetings. We especially enjoyed being on the dance floor with you and Jerry at the 2019 winter Southern Cotton Growers meeting.

So sorry for your loss. We loved watching the two of you dance. Prayers for you and your family.♥️

So sorry for your loss! We always enjoyed seeing the two of you dance. Prayers and love to you and your family. Love, Jamie and Ralph Sandeford

A good family man and fair business man… The family will be in my thoughts and prayers in the coming days.

My prayers are with the family. I am so sorry. He was such a good person.

My prayers are with the family. I am so sorry. He was such a good person.

May God’s Peace be with all of you, Bettye.

Sending sympathy and prayers for the Lord’s supernatural comfort and strength for the family and loved ones. Jerry was a great man and a very kind man.