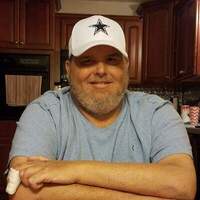 John grew up in King, NC and graduated from South Stokes High School. He was part of the marching band, tennis team and routinely participated in church league and travel softball.

John had a passion for all sports though baseball, basketball and football were his love. He was a die-hard Dallas Cowboys fan even though marrying into a Philadelphia Eagles family and loved the Atlanta Braves.

John resided in Ahoskie, NC, and worked 18 years in Bertie County School System as a Middle School Physical Education and Health Teacher, Coach, and Athletic Director.  He was active with afterschool programs, Relay for Life, First Responder and served as a mentor and father figure to his students.  So many young adults today are on the right track in their lives because of the values that John helped instill in them.  Being called ‘Coach’ is a huge word and he fulfilled his duty as such.  God placed John in a position that he could nurture students and athletes – and that he did well.

John, John Boyles, John-John, JB and Coach Boyles you will deeply be missed. Until we meet again.

A celebration of life memorial service will be held on January 8, 2022 at 2:30 pm at Garrett-Sykes Funeral Service, Ahoskie, NC, and the family will receive friends immediately following the service. There will be a time for refreshments and reminiscing with stories of how John touched many lives.

In lieu of flowers, donations are appreciated to the American Kidney Foundation, the American Liver Foundation, or the athletics program in Bertie County school system or school of your choice. It’s all for the kids.

Garrett-Sykes Funeral Service is assisting with the service and condolences may be directed to the Boyles family by visiting garrettsykesfs.com

John always looked out for me as a member of the softball team at East Carolina University. He would often give me rides, he always helped me when I needed it and we shared many laughs together as teammates. If there was a resource, John had it or knew where to find it. He actually taught me how to play spades on many bus trips to softball tournaments. John was a good friend and will certainly be missed. I am grateful for the time that we shared together as Pirates. John now that you have gained your wings, you can paint heaven Purple. Rest easy my dear friend. Arrrrgggghhhhhhhhh #PurpleReignForever

Both my kids were lucky enough to call him “their” coach and I was honored to be one of his many friends. No matter how far apart we ever got the minute we heard each other’s voice it was like we still saw each other daily. RIP my ole buddy!!

Sue, so sorry dor your loss. John was one of the good guys and coaches. We won’t be able to be there due to us being under covid protocol. We will be there in spirit. All our love. Al and Martha Parker and Abby Parker

Our sincere condolences. John was such a good man and will be remembered by so many.