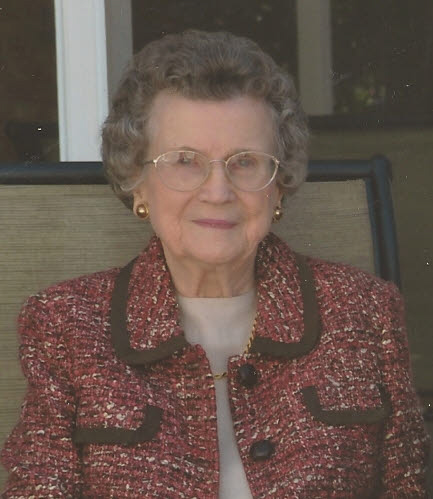 The family will receive guests following the service at the church.

Mrs. Lawrence was born in Columbia, NC on October 29, 1918 to the late James Henry and Mattie Swain Bateman. She was educated at Columbia High School, earned her B.A. at Women’s College of the University of North Carolina Greensboro (now UNC-G) and her Masters in Religious Education (MRE) at the former Woman’s Missionary Union Training School in Louisville, KY. Following graduation, she served as Director of the Baptist Students Union at Woman’s College of UNC, Greensboro. At one time Laura served as President of the North Carolina Ministers’ Wives and of the Southern Baptist Convention Minister’s Wives (in 1977) and with her husband as he served as minister of Little Flock Baptist Church, Shepherdsville, K.Y., Sunset Park Baptist Church, Wilmington, N.C., First Baptist Church, Shelby, N.C., and Forest Hills Baptist Church, Raleigh, N.C. Always a minister herself, Laura was committed to the service of others throughout her entire life. Her interest in, and love for others, is her legacy. Her continual memory for important persons and events in the lives of others is legendary among her family members and friends. She was a continually curious individual whose view of the world was wide. She was interested in, and explored the meaning of all things. She was a woman of infinite faith, always on a quest for a deeper spiritual relationship with her Lord. Her love for, and influence upon, her grandchildren will be everlasting. Her expressions of love for all of her co-residents at Brookridge will be greatly missed.