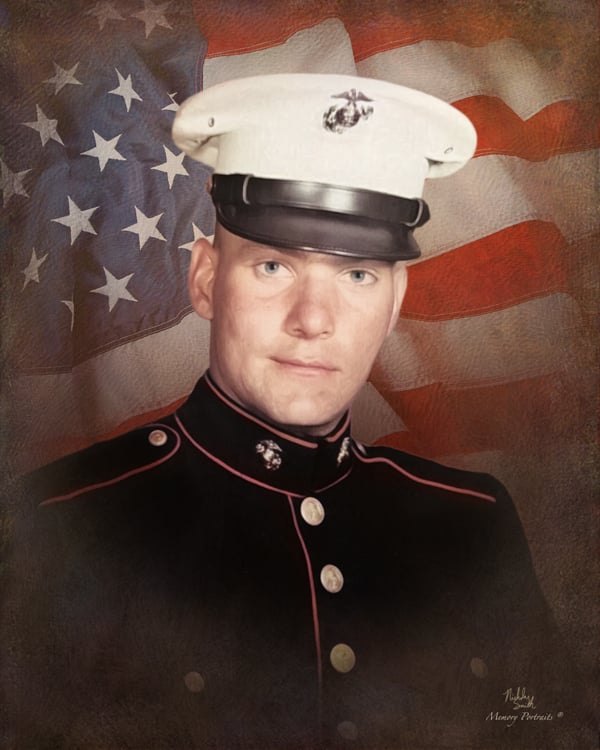 COLERAIN, NC – Jean Charles Drake, 75, of Colerain, NC passed away peacefully at home in his favorite chair on October 17, 2021. Born November 6, 1945 in Portsmouth, VA.  He was the youngest son of John Carroll and Carrie Ralph Drake, who raised him with a Christian faith. He enjoyed an idyllic childhood in the Craddock area of Portsmouth where his father worked at the Naval Shipyard. A Christmas Day fire in 1955 burned their home and forced the family to relocate to Suffolk, VA. There he played varsity football and graduated from Suffolk High School before joining the U.S. Marine Corps in 1965. He served 4 years on active duty including a deployment to Cuba, a stint with the Marine Corps football team, and a participant on the National Rifle Team. During a shooting match in Port Clinton, OH in 1966, he met the love of his life Ann Marie Hurrell. They married 3 dates later in Monroe, MI on August 29.

Ann and Jean moved to Suffolk, VA, where Jean worked for the Virginia State Police, Chesapeake Sheriff Department, and later at Frederick Military Academy. In 1984 they moved to Ahoskie, NC where Jean chaired the Criminal Justice Department at Roanoke-Chowan Community College until his retirement to the shores of the Chowan River. He converted to Catholicism slowly over decades of attending mass with his wife, a devout woman. Football was his greatest devotion with hours spent at both his sons’ middle school, junior varsity, varsity, and college football games and practices.

He is preceded in death by his wife of 42 years Ann Marie Therese Hurrell Drake, his parents, and both brothers John Carroll Drake, Jr. and Frank Drake.  Jesus said, “I go to prepare a place for you”—a quote that stayed with Jean for the rest of his life after a near-death experience in 1982.

Memorial contributions may be made to the Ann Drake Teaching Scholarship Fund at Chowan University, One University Place, Murfreesboro, NC 27855 or online by clicking here.

Garrett-Sykes Funeral Service – Ahoskie Chapel is handling the arrangements for the Drake family and online condolences can be directed to the family by visiting www.garrettsykesfs.com.

Sorry to hear about Jean, we were best friends in school, Use to get his dads truck and ride around Suffolk “Duck in a Truck” . I went off to the Air Force in 1963, purchased Jean’s 57 Chevy Convertible from him in 1965 . We talked a few times over the years, but lost touch with him. He was a great guy, sorry to hear he passed. My Condolences to family.

Dear Chad & Beau, I am a long time friend of your Father. I unfortunately just found out about his passing. I was blessed to have known such a wonderful and brave man. Our conversations were always full of laughter and how proud he was of the both of you. He will be missed terribly. My condolences to all. Betty Vaughn

BEAU AND CHAD,
I saw your Dad had left us. He was always a kind and nice man to me. I remember seeing him at football games and working around outside in your family’s yard. He always had a smile and hello for me. Telling me about the Marines. I did not go to the Marines (Army) but I did take his patriotism and love of country and made it a part of my own. Reading about his conversion to Christianity made me smile and know that he had a full life. Pride in his family and faith in his God. I am sorry for your loss and your families are in our prayers.

Chad and Beau, your dad and I worked together at RCCC. In recent years we saw one another occasionally, promising that we would find time to see each other more frequently. Then Coved changed so many things. Know that our thoughts and prayers are with your family and you at this sorrowful time. May you know that your dad is now at peace. He loved you dearly. He is greatly missed by all of us who knew Him. My wife and I will miss hearing from him about the new grand baby.
You know that is what grandparents talk about. Stay encouraged. Holding on to the memories.

Jean is the dear father in law to my niece Jessica. I remember him participating in many fish fries at Jessica’s mom’s home in Suffolk. My condolences to Chad and Beau who dearly love their father. He will be greatly missed.

Chad and Beau, my deepest sympathies to you and your family. I will never forget your Dad greeting me every Sunday morning going to St. Charles. Take care and reach out if you need anything.

Mr. Drake was a great man! He helped direct slot of students in the right direction! Rest in peace Mr. Drake

Mr. Drake was a mentor and friend to me since graduating from college. He said the words ” Masters Degree” several times when I saw him when I was still able to work. After Mrs. Drake died, he offered to take me to some of my drs appts. When I was trying to get disability on his new Mustang. I loved Mr Drake because he was your Daddy, Beau and Chad. He was a good friend to Mama and Daddy. Mama and Mr Drake were the only parents at Clay and Beau’s football games. Beau, I wish I still had the ability to make you a big bowl of homemade pimento cheese and a super-sized dirt cake to share with all the family. Beau I love you and miss you little brother. Our prayers and thoughts are with y’all and I will be there in instead foe anything you may need. Please contact us at 252-319-1243. Beau Drake I better hear from you . Love ya! Ma2

We were so sad to read of your dads passing which lead to a 30 minutes of going down memory lane which started at the catholic church, conversations with your mom at the elementary school , running into your dad to talk about you boys and Chicago bears and our Steelers. My heart is broken for you’ll and his grandchildren. Iove you guys Donna and Jim Steele 252 332 4549
.

I didnt have the pleasure of knowing Mr. Drake but I played High School football with Beau. He was a great dude and tough competitor back then and Im sure he got that from his father Mr. Jean Drake. My deepest condolences to all the family. May God give you peace.