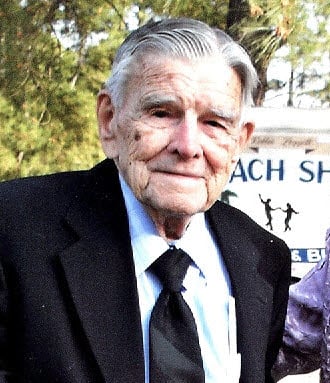 On Wednesday, June 25, 2014, our beloved father, grandfather, and dear friend, Otis Windell Casper, quietly slipped away from this world to claim his eternal victory with his Lord and Savior, Jesus Christ.

A funeral service will be held at 2:30 p.m. on Friday, June 27, 2014 at the Oak City Baptist Church. Interment will follow at Oak City Cemetery. The Reverend Lyle Brackin and the Reverend Delmus Ayers will be presiding.

Otis was born in Martin County on September 30, 1923 to the late Mary and Samuel Casper. He graduated from Oak City High School before working at the shipyard in Virginia and then served in the U.S. Navy during World War II. Otis was a member of Oak City Baptist Church and was a member of Oak City Fire Department when it started in 1955. He was one of the first ones to establish the Oak City Rescue Squad and served as a Town Commissioner for 25 years. Otis was a retired farmer, and after retirement he loved to make crafts and spend as much time as possible at the beach. He will be greatly missed by his family, friends, and all those who knew and loved him. Otis always had a smile and a hug for everybody and children were drawn to him.

Otis was married to Pattie Fleming on December 18, 1948 for 65 years. They had two children; Linda Brown married to Eddie Brown, their daughter, Christina Ross and her husband Chris Ross, and their two children, Payton and Riley Ross; and Allen Casper and his three sons, Whit, Lee, and Sam Casper. He also leaves behind a daughter-in-law, Kristy Casper; a host of family and many dear, loving, longtime friends; and two loving caregivers, Florence Harris and Monica Andrews.

Flowers are welcome or memorial contributions may be made to the Oak City Baptist Church Men’s Association, P.O. Box 39, Oak City, NC 27857.

Arrangements are being handled by Letchworth Funeral Home in Scotland Neck