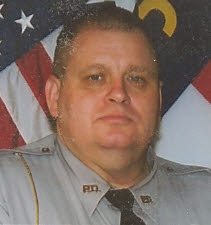 Randy was a loving father, son, and granddaddy. He was a Veteran of the Gulf War, a Detective with the Enfield Police Department, and had been in law enforcement for many years.

Randy was preceded in death by his brother, Ricky White.

He is survived by his children, Brittany Foti and husband John of Glenville, NC, Lauren, Kristen, Jon, and Justin; his mother, Millie Palmer; and his grandson, Landon Foti.

Randy Lynn White was perhaps one of the finest Marines I knew from my days in the Marines. He was competent, focused, and possessed of an unbreachable integrity. I remember in training, during a long and grueling march in the hot summer sun of Camp Lejune, there was White, inspiring us all with his example.

I would ask myself, “how did White do it? From what material did he fashion himself?”

Given the great trust placed in him by the leaders in his chain of command, I can safely say the finest material from which Marines are made.

Semper Fi, Cpl. White. The streets of heaven are in good hands.