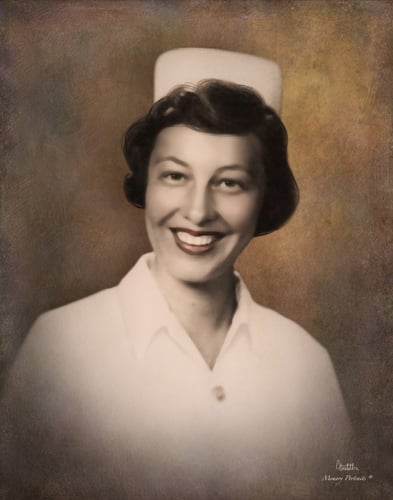 DURHAM, NC – Sarah Sue Bryant Partin passed peacefully into the hands of our Lord and Savior at home in Durham, NC March 12, 2021 having resided here for 11 years. She was born in Walker county, Alabama, the youngest daughter of the late Wiley Bryant and Minnie Cate Calloway Bryant.

She was preceded in death by her beloved brother, Bobby Bryant and sister, Betty Joe Cary. She is survived by her husband of 52 years, Howard Partin of Durham, NC; son, Sean Clark and spouse, Lynda of Oxford, NC; daughters, Laura Partin of Pinetops, NC and Jeanne Larsen and spouse Pete of Arlington, VA. Sue is also survived by five grandchildren and eight great grandchildren.

Sue attended Jacksonville State University in AL and received her nursing degree from the Ida Moffett School of Nursing at Samford University in Birmingham, AL. Sue began her profession working at various hospitals, got married and had a son. Sue accepted a position in Atlanta as an Industrial Health Consultant when she and Howard met and later married. Sue began her life as a full-time wife and mother in Durham, although she was also active in the local New Comers and Garden Club, having received a number of blue ribbons for flower exhibitions.

Sue grew up in a Christian family and when Howard was transferred to northern New Jersey, she began her life also as a Christian leader at the Southern Baptist Church near their home. She led the Awana Club for young children, Bible study for foreign women, whose families were transferred to the U.S., and became a deacon of the church. She was a girl scout leader and was active in the Special Olympics program.

Even after her disability for the last 9 years, Sue continued to exhibit the joy in her heart, love for all and friendship to many.

The family will receive friends on Tuesday, March 16, 2021, from 12:00 pm  until 12:45 pm at the Chapel of Letchworth-Sykes Funeral Service, Scotland Neck, NC, with a celebration of life funeral service following at 1:00 pm, with Dr. Marc Francis and staff from Ridgecrest Baptist Church of Durham officiating. Burial will follow at Sunnyside Cemetery in Scotland Neck, NC.

The family would like to thank all employees of Duke Home Care and Hospice and other care givers for the care they have provided.

In lieu of flowers, memorial donations may be made to the Awana Program at local churches or to local Special Olympic Committees.

Letchworth-Sykes Funeral Service is handling the arrangements for the Partin family and online condolences can be directed to the family by visiting letchworthsykesfs.com.

Howard and Family, We have only just learned of Sue’s passing. What a treasure she was to us as neighbors in Wyckoff. We are grateful of her solid relationship with her Lord, and look forward to being “neighbors” again someday.

We were so sorry to hear of Sue’s passing, Howard, which we just learned about today. When you called, she was still with us. So sorry! We will always remember the trip to Italy we all shared ~ so many laughs ~ such fun, when you attended our daughter’s graduation from university there. We will never forget her and her joyous spirit and always your good care of her.

Howard, I am so sorry to hear to hear of Sue’s passing. Please accept my condolences

Sue Partin’s recipe for life:
We first met the Partin family at church in NJ, and raised our families there. Sue sang joyfully unto the Lord at all times, and baked and served her way thru many church fellowship lunches. Today I often take Sue’s Corn Casserole to a fellowship, and will always remember her fondly for sharing her life with us for a while in NJ.
Sue’s Corn Casserole
Preheat oven to 375 degrees, and mix all the following ingredients in a single bowl.
3 eggs
1 cup milk
1/4 cup sugar
2T flour
1/4t salt
1/8 lb butter melted
1 can cream corn
3 cans white shoepeg corn
Bake 1 hour – and then share with good fellowship.

We celebrate the life of your wife and mother, and rejoice that she is singing joyfully now with Jesus and the saints.

My dad and I are sad to hear of your loss. We both enjoyed Sue and you at the senior center. I was very proud of the way she continued to carry on even in the progression of her illness.

Sorry to hear of Sue’s death. She sure tried her best to enjoy life. My condolences. Dan

Howard, our prayers are with you and your family. So sorry for your loss. Sue certainly served the Lord wherever your family lived. God bless you all during this time.

Howard/Family, We have so many memories of Susie Q at the Little River Senior Center. I remember how she couldn’t get in the door fast enough so we could all greet her in the morning and ask her how she was doing and she would always answer with ” I’m HUNGRY” LOL!! Boy, that girl could eat, especially the treats I used to make her. You wanted her to wait till she ate her lunch and she had other ideas, LOL!! I’ll never forget that BIG Smile she had on her face except when she was fussing with you that day, LOL. How about all those Beautiful pictures she colored at the Center, she has her own wall of them, LOL. Susie Q is Face To Face with Our Lord & Savior and at PEACE!! Our Love & Prayers are with you, and may Our Lord Comfort You/Yours during this Difficult Time. Love & Prayers, Ed & Darlene