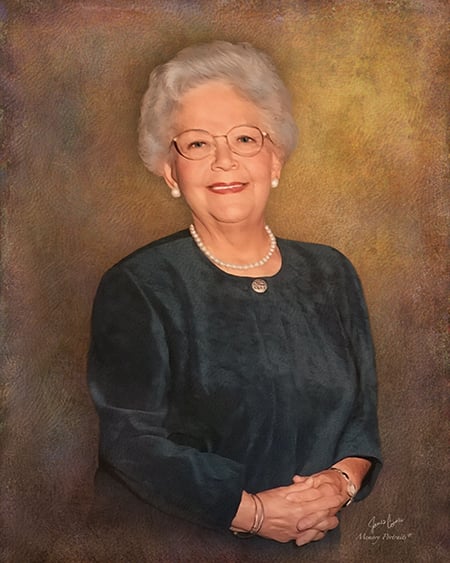 The family will receive friends following the service at the cemetery.

Lake was married to Wilson, the love of her life. Together, they raised six children.   She was very proud of each one.   She was also extra proud of her grandchildren and great grandchildren and did not hesitate to brag on their accomplishments.  Lake was an only child, and she grew up with the nickname “Monkey” which was given to her by her beloved parents.  Her father owned a car dealership. He bought and delivered a brand-new convertible to St. Mary’s College to Lake before she had her driver’s license.  She and her roommate were admiring it through the window, and not knowing it was a surprise for her!  Lake had a love for cooking.  When the family moved to Elizabethtown, NC, she started a small catering business and catered to many civic clubs including the Kiwanis and Jaycees.  She and Kelly Cross, her dearest friend in Elizabethtown, collaborated on many things including cooking, sewing, and raising children. She was very involved with civic activities and served on many boards including the Heart Fund of Southeastern NC and the Board of Elections in Halifax County.  While living in Elizabethtown she was active with the high school and junior high school bands. She would chaperone on many out of town band trips, one of which was the 1973 Presidential Inaugural Parade in Washington, DC.   She was an active member of Trinity Episcopal Church where she served as President of the Episcopal Women and the Altar Guild. She accompanied one of her best friends, Sandra Taylor, as a missionary to the Czech Republic where she taught English to the children.  She also served, along with Walter Byrum, as the assistant director of the children’s choir at First Baptist Church in Scotland Neck, NC. In her spare time, she enjoyed listening to music, a few of her favorite songs were Last Night and Wolly Bully. She also enjoyed needlepoint, crossword puzzles, bird watching, reading her bible/devotionals but most of all she enjoyed a good cup of coffee while visiting with family and friends, preferably on her porch.

She is survived by her daughter, Helen Leggett Lattus and her husband Jerry of Wilmington; a son, Woody Leggett  and his wife, Debbie of Elizabethtown/Wilmington; a daughter,  Ginny Leggett Mauter and her husband, Bill of Atlanta, Georgia; a son Hilliard Leggett of Scotland Neck; a son Quentin Leggett and his wife, Janet of Rocky Mount; and a daughter, Mary Hodges Leggett of White Lake; three grandsons,  Sean Leggett and his wife, Amy, Will Leggett, and Jim Leggett; a granddaughter, Anne Madison Leggett; and two great grandchildren Caid Leggett and Ella Leggett.  She is also survived by her beloved puppy, Charley, of White Lake.

A Celebration of Life Graveside service will be held on Saturday, October 24, 2020, at 11:00AM at Old Trinity Cemetery, Scotland Neck with Father Ted Malone officiating. The family will receive friends following the service at the cemetery.

Due to the current situation with COVID19, the family requires masks at the service.

In lieu of flowers, donations can be made directly to the Trinity Episcopal Cemetery Fund, PO Box 372, Scotland Neck, NC 27874 or online by clicking here.

Letchworth-Sykes Funeral Service will be handling the arrangements for the Leggett family and online condolences may be directed to the family at www.letchworthsykesfs.com

So sorry to hear about the passing of your wonderful Mom. I never met Mrs. Leggett but I am sure she was a wonderful person and deeply loved by her friends and family . Surrounding all of you in prayer

To my dear “6” siblings, you all know I am the 7th!!! I love “Munh” sooooo much!!! Have not seen her in a long time. I have been busy looking after the love of my life. Billy is in Heaven now and I know he is happy to see “Munh”. Praying for all of you and I love you all too!!!

Our hearts and prayers are extended to Ginny, Bill, and the entire Leggett family as you mourn the loss of such a Great Lady! Much Love, Ronnie, Teresa, Sarah, and Jack

I remember Lake for always being so sweet, kind, and always having that beautiful smile on her face, and that laugh! I remember going to Lake’s house in Scotland Neck for a Mary Kay Cosmetic Party years ago and she really made it so fun! She’s the reason I still use the Products today. I know her family and friends will miss her so much! Sending my deepest heartfelt sympathy to each and everyone.

Thoughts, prayers and love to you all. I have many fond childhood memories of spending time with Mrs. Lake. She was always so fun and kind and will be greatly missed!

Mary I am so sorry for your loss. Lake was the cutest most lovable lady I have ever met. I will always treasure the talks we had and the best hugs in the world. She will always be close to my heart! She was a special lady!

Helen and Mary
So sorry to hear about your mom. She was such a beautiful lady. Prayers for you and your family.

My thoughts and prayers have been, and continue to through the days to come. She was such a special lady to many and will be missed. I won’t say goodbye, but see you later Mrs. Lake!