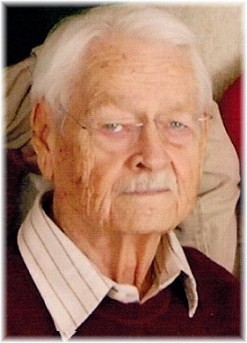 Wallace Gray Johnson, formerly of Garner, NC died at his daughter’s home in Halifax, NC on October 26 at the age of 85. He was born on July 1, 1927 in Wilmington, DE to the late Dr. and Mrs. Wallace M. Johnson of Newark, DE. He served in the Seabees during WWII and attended Gordon Military College in GA after his discharge. He earned a degree in Agriculture from the University of Delaware and worked for the NC Department of Agriculture as a Marketing Specialist for thirty-two years. Wally enjoyed traveling across the state and working with farmers and cotton ginners. After retiring, he worked part-time for Cotton Incorporated in Raleigh, NC.

Wally married Jaqueline Ann Davis Johnson on September 1, 1951, and they were married for 57 years. He was devoted to Jackie and together they raised four children. He will be remembered as a wonderful father who always had time for his children. He especially loved his grandchildren, and they were his pride and joy. He was a member of Elizabeth United Methodist Church in Smithfield, NC. Wally served as Worthy Patron for the Order of the Eastern Star in Newark, DE and was a charter member of Order of the Eastern Star Chapter in Garner. He was a member of Vandora Masonic Lodge in Garner and also served as Master of the Lodge. He was past President of the SAR Chapter in Raleigh. Wally was active in many historic groups.

Wally was preceded in death by his wife, Jackie, his infant daughter, Estella Johnson, and his sister Jo Ann Johnson. He is survived by his children: Wallace M. Johnson II and his wife Sandy of Elkton MD, Jo Ann Johnson Guins and her husband Ray of Smithfield, NC, Robert D. Johnson of Smithfield, NC and Denise J. Fluharty and her husband Mike of Halifax, NC. He has five grandchildren, Robert Johnson and his wife Debbie, Tommy Fluharty and his wife Leighan, John Raymond Guins, Martha Fluharty, and Harris Johnson and has four great grandchildren Robert Johnson Jr., Chase Fluharty, Kara Fluharty, and Gabriella Johnson.

Garrett-Sykes Funeral Service in Rich Square, NC is handling the arrangements in NC, and Hicks Home for Funerals in Elkton, MD is handling the service in Cherry Hill, MD. In lieu of flowers, the family suggests a donation be made to support a charity of your choice.