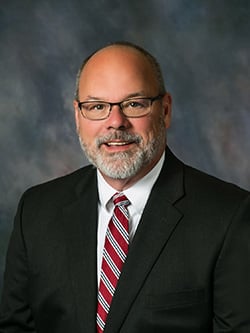 Scott Sykes has been a funeral director and embalmer for over 30 years and proudly serves as General Manager of Garrett-Sykes and Letchworth-Sykes Funeral Service.

He is the son of the late Faris and Emma Ruth Sykes of Enfield, North Carolina. After graduating from Enfield Academy in 1983, he attended Chowan College in Murfreesboro before deciding to follow in his father’s footsteps. Scott completed his funeral service education in 1985 at Gupton-Jones College of Mortuary Science in Atlanta, Georgia.

He and his wife, Sarah owned and operated Sykes Funeral Service in Rich Square for over ten years before they merged with Garrett Funeral Home in Ahoskie in 2012 and Letchworth Funeral Home in 2016. The union of these funeral homes has allowed Garrett-Sykes and Letchworth-Sykes Funeral Service to provide families with more options, convenience, and personalized service.

Scott and his wife, Sarah were married in 1989 and have two children.